--How can you prevent the dropping of buds due to ethylene damage? 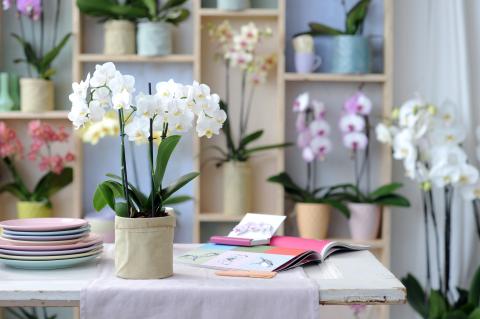 Flower petals shrivel up and the buds and leaves drop, which obviously shortens the vase life expectation of cut flowers and the shelf life of potted plants. This is caused by ethylene, the ageing hormone produced in excess by cut flowers such as Dianthus, Delphinium, Agapanthus and in potted plants such as Phalaenopsis and Campanula.

Dropping of buds, blooms and leaves usually happens as a means to protect plant and trees from drying out. For cut flowers and potted plants this dropping of buds, blooms and leaves is often the result of over-production of the growth hormone ethylene. Ethylene is the only known gaseous, naturally occurring plant growth hormone. Ethylene gas regulates the ripening/ageing of cut flowers, potted plants, fruits and vegetable fruits. Ethylene gas is therefore purposely used to promote the ripening of fruit and the blooming of potted plants.

There are basically two sources of ethylene:

Because of the ethylene, the ripening/ageing process of flowers that are sensitive to this growth hormone is accelerated. The life expectation of e.g. Dianthus (carnation), a very ethylene-sensitive flower, for example, is 3-4 weeks after harvest. Exposure to ethylene production can decrease this flower’s life expectation to 1 week. Since the distribution and sale of cut flowers generally takes at least a week, no vase life will be left for the consumer. 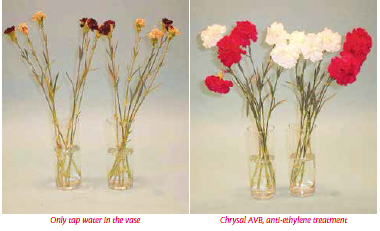 What can you do?
Developmental stages, once reached, cannot be reversed. The ripening/ageing process with regards to ethylene can only be returned to its natural level by the application of post-harvest treatments. The sooner this post-harvest treatment is applied, the better the ultimate vase life will be. Growers’ treatment products which have a base of silver thiosulphate/STS (Chrysal AVB) or 1-MCP (Chrysal Ethylene Buster), protect against the above mentioned negative effects of increased ethylene production (internal and external). Chrysal AVB correctly applied by the grower will protect the flower for the rest of its lifespan. The protection of Chrysal Ethylene Buster depends on the type and length of a flower and the temperature the flower is in.